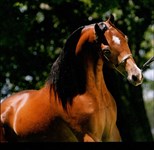 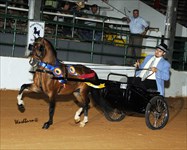 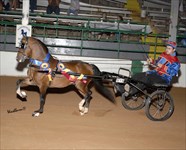 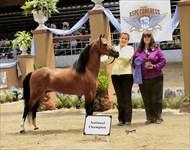 Sired by the Congress Halter and Driving Grand Champion, Rocket's Will Doo (HOF Double Superior Sire), who has sired multiple other Champions, HOF, and another of Pony of the Year in Modern Halter AND Performance, Cornerstone's Valiant Man.

And this cross between Rimfire's sire and dam has produced the best of the best. Rimfire's full brother, Swan.Fair Victory, was the 2010 Congress Grand Champion Classic Stallion in halter, and multiple Congress Champion wins since in both driving & halter. And we also own his full sister, Rachel Alexandra (HOF), who was 2012 Modern Pleasure Pony of the Year in BOTH Halter and Driving, 2013 Modern Pleasure Driving Pony of the Year again, and multiple time Congress Grand Champion in both halter and driving.

What impeckable breeding! And what outstanding performance! To top it off, Rimfire earned the prestigious award of 2010 Pony of the Year in Classic Performance driving! He sure turns all heads every time he enters the show ring. And when he's not there people are still asking about him.