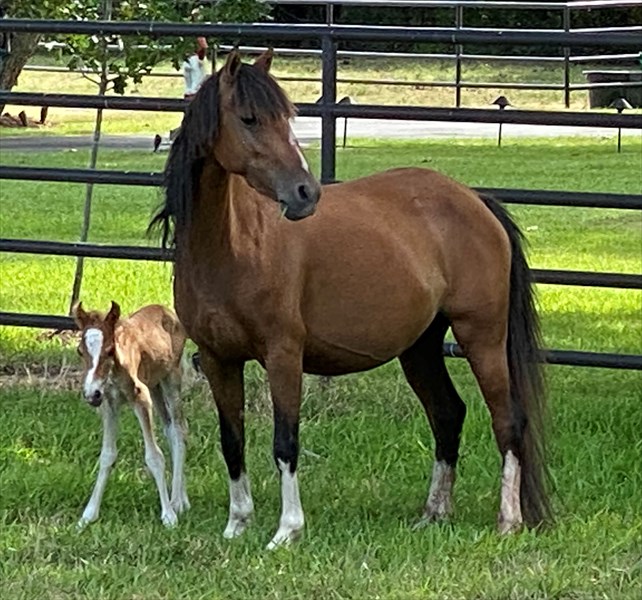 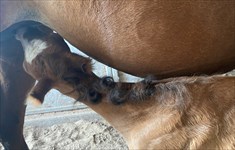 This colt was born overnight today as his mother's 1st foal, and one of our prize stealing mares stole this baby away from his unexperienced mother! Later in the morning after I brought the baby and real mother in to a stall, I had to halter and tie the Mother in order for her to let the baby learn to nurse. Then I had to milk the mother and bottle feed the baby trying to get him started, since he was weak from not nursing yet, and couldn't nurse. So all afternoon I've been tying this mare to let the baby nurse every 30 minutes, and the mother is starting to let the baby follow her around without kicking him away. So the baby does a lot of following me around instead of his mother when I go out to feed.

This baby has curly locks all down his mane like Shirley Temple curls. So I decided to name him CH Curly Dahl in honor of the new owner of this foal's sire, Wilk. Great Reward (HOF). And the colt really is a "curly doll"! And he already has the makings for a real beautiful trot from his video as a newborn before he can even get his legs under him good.

Take a look at the videos of both this colt's sire and dam on their pages on this website, to see what accomplished and talented both of his parents are at Modern Driving (sire Modern Formal Driving & dam Modern Roadster Driving). Thank you to Robby and Andrea Barth, who trained and showed both of them for us to the greatest performers and titles they each earned.

There are no recent news items.